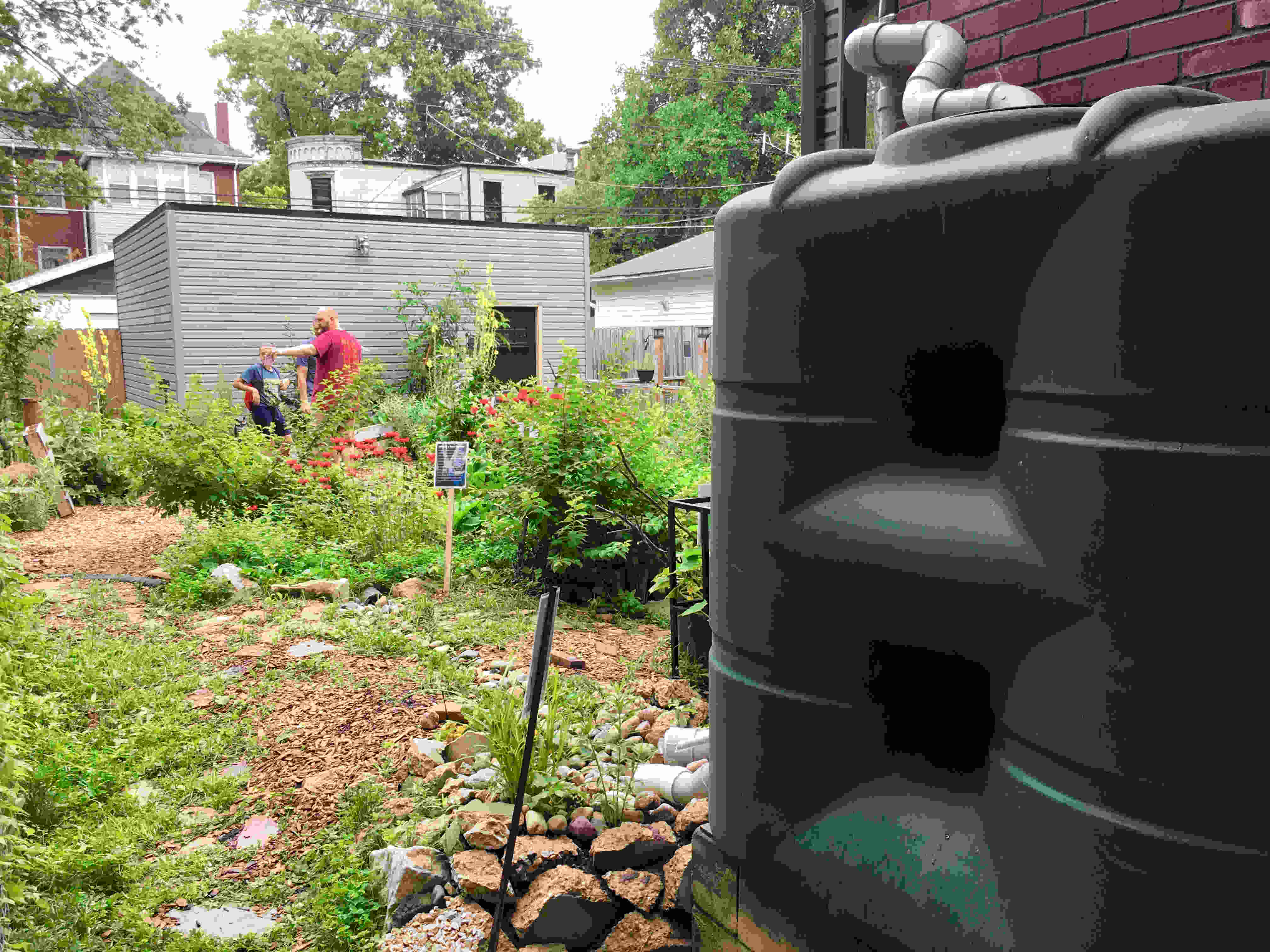 Many of our course participants go on to do great things with Permaculture. This summer during the Sustainable Backyard Tour in St. Louis, MO, I made a point to visit the home of Ryan Young and his family. Ryan was a participant in the Saint Louis Permaculture Design Course (PDC) in 2017-2018, and I’d been way overdue checking in on what he’s been up to.

On a crowded block of brick two and three-stories, I found Ryan’s home immediately by spotting a slim cistern neatly tucked against the house. Ryan took the water harvesting lessons from the PDC to heart by designing a home landscape that can be entirely irrigated from harvested rainwater. The benefits to this are huge, but perhaps most importantly in this land of big rivers, Ryan is no longer contributing runoff from his property to the sewer system, which directly impacts water quality for downstream neighbors, and contributes to the near lifeless hypoxic zone of the Mississippi River delta.

These are not small impacts. Part of the power of one person taking care of their runoff footprint like Ryan has is that it demonstrates what’s possible when we all do. At scale, cities can become natural places, full of a whole diversity of life, with food dripping from trees and shrubs beside runoff dripping into basins, cisterns, and swales.

More than anything though, as a stay at home dad, I think Ryan just wanted to raise his kids in a verdant, life-teeming place with good things to eat. I’ve watched yards like Ryan’s positively effect families for years. In suburbs and cities, it’s only become increasingly common for young kids to be disconnected to nature and their food system. Remediating this has been a pattern in my own work and I love seeing my students expand it.

To pull this all off, Ryan crafted a landscape design with his Permaculture training, applied for a rainscaping grant from the Metropolitan Sewer District in St. Louis, and ultimately was awarded funding. That allowed the purchase of materials like cisterns, which otherwise can be cost prohibitive. Small grants like this exist all over the country too and are becoming more and more prevalent. What the grant couldn’t pay for, Ryan pieced together as time and funds allowed, which is what most folks do, but as funding to positively impact our environment becomes increasingly available, Ryan suggests it’s worth looking into opportunities in your area.

Well-planned work goes a long way toward success. A couple of weeks after visiting Ryan, he sent me a photo of the Yard of the Year Award he received from the organization who hosted the garden tour. I was elated for him!

People putting what they learn into practice, taking it to their unique neighborhoods, and inspiring others in following suit has the potential to shift many of our collective destructive patterns. That’s part of the ‘each one, teach one’ power of the PDC. It’s not the only level of change to be sure, just an absolutely essential one.

For more info on our Permaculture Design Courses visit: www.permaculture.org/courses/

When I learned Permaculture almost 20 years ago, there were few books one could learn from for applying Permaculture Design to specific subjects. Two years after my Permaculture Design Course, Brad Lancaster, one of my original instructors, published his water harvesting books, and I dove right in.

The first edition of Rainwater Harvesting for Drylands and Beyond Volume 1 was a groundswell for my life. It allowed me to take my practice of Permaculture into the world of water systems. I lived in Central Arizona then, and water harvesting was badly needed to grow much of anything in that parched landscape. I built rainwater capturing swales and basins in different contexts, put trash cans under my downspouts during monsoon season, and even constructed one rock dams across erosive rills and runnels on hikes in the national forest. The book guided me in the mindset, details, and joyful approach of opening oneself up to downpours that Brad Lancaster taught with. It imparted the preciousness and potential of each raindrop.

A couple of years later, Rainwater Harvesting for Drylands and Beyond Volume 2 was released and I knew I would continue with water system work. I felt so alive thinking about and working with water in the landscape. I had also just moved to Colorado where water harvesting was legally prohibited. I set myself on changing that, and to do so, had to build a lot of rain gardens in a confusing legal landscape, however undeterred.

Volume 2 was all nuts and bolts for passive water harvesting via earthworks. I referenced the book in the field constantly. I remember constructing water harvesting basins and terraces on a grassy slope at 8,500 feet in the Rockies —the pages still bear my soiled handprints. As I worked, I noticed how the terrace rocks held the sun’s warmth, which would keep my garden warmer in that cold climate. I reveled in finding additional functions from what I was doing. In Brad Lancaster’s words I began to “do more than just harvest water”.

The water work was transforming me to make connections that were not obvious. Just harvesting water was no longer enough, so I learned Colorado Water Law to understand the history behind the prohibition of capturing the rain in hopes of making further connections. The reasons for prohibition were understandable, mainly that it was important not to impede the flow of rain so downstream users were ensured water. On the surface I could understand how one would think intercepting the flow of runoff from an upstream rooftop or street would reduce downstream flow, but what was less obvious was what happened to precipitation once infiltrated into the ground.

It turns out infiltrated precipitation is what keeps streams perennially flowing as opposed to surface runoff. Logically then, increasing infiltration could be viewed as a good thing, especially considering the high evaporation rate for surface water in drylands. I took it to the streets so to speak, and confidently built more and more rainwater harvesting gardens, armed with data from studies commissioned by the state itself that showed 97% of all surface runoff wouldn’t even make it to the stream before it evaporated.

With this new confidence, and seeing the oasis-like results of my work, I sought out opportunities to teach municipal water managers, sometimes to dismissing comments that I was promoting illegal behavior. Unfazed, I spoke at conferences, put on workshops with conservation organizations, eruditely challenged the governor in a town hall, and eventually persuasively presented my work and information in a special session of the state legislature.

It was a pivotal time in Colorado water history. The historic basis for water harvesting prohibition in the state was eroding, and I, along with many of my colleagues and students, were pushing from all sides. We made headway. New laws permitting rooftop runoff were written, greywater reuse was legalized (even though it’s still in limbo), public opinion was shifting via education, and the work continues, in no small part to the hard work of Brad Lancaster in compiling his books.

Eventually I moved away from the drylands back to my home city of St. Louis, Missouri, a much wetter climate, where I looked forward to working with water in a different context. I moved into the seemingly nebulous “Beyond” that the books titles referred to. It wasn’t nebulous at all however, because almost everything I learned about water harvesting in the drylands worked for flooding in this region of 40 inches of annual precipitation. The techniques work to reduce nutrient pollution in the mighty riverways of this land too, a co-benefit of water harvesting and an environmental issue of incredible importance for the Mississippi River Basin.

There’s a lot more work to do managing water resources for the health of people and ecosystems. Perhaps we just need a lot more people to read Brad Lancaster’s books and put the information to use. As a practitioner and instructor of this work, I can honestly say there is no better time to learn water harvesting green infrastructure practices than now. For one thing, we need it more than ever. For another, it’s a rapidly growing field. But even more so, those learning this work have a better-than-ever resource at their fingertips in the new all-color editions of Rainwater Harvesting for Drylands and Beyond. The books might just change your life and the world around you.