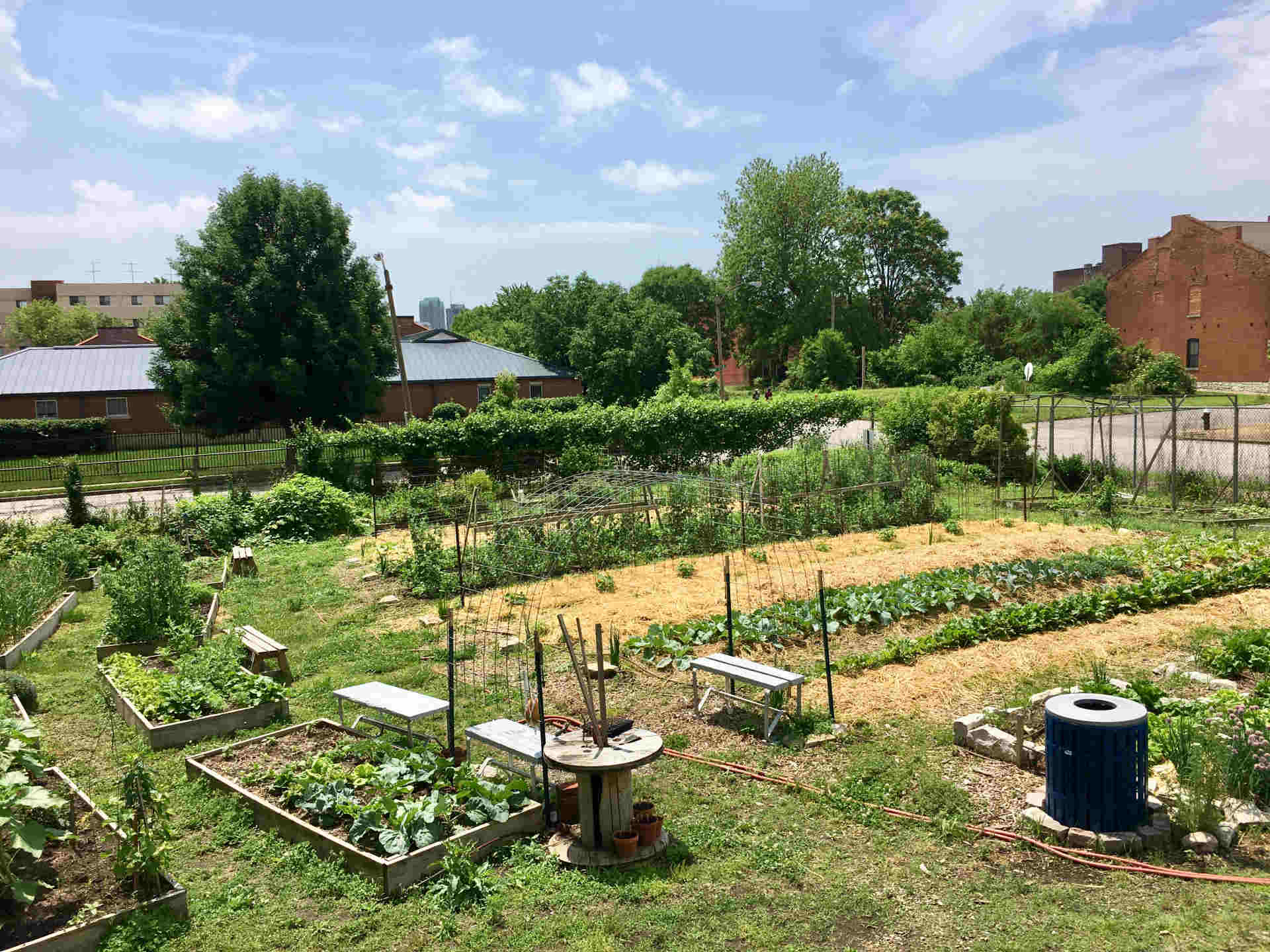 North City, Saint Louis, Missouri, 3am…I’m freshly awoken, once again, by the heart-stopping sound of 15-20 gunshots fired from what sounded like a cannon on my street. Some days around here, rebuilding community seems utterly fraught with impossibility.

I’ve lived in the Old North St. Louis Neighborhood for almost three years. I still can’t bring myself to call it my neighborhood. I may be a member of this place by residence and involvement, but I didn’t lay a single brick in these sidewalks. Nor have I stuck it out through the hardest decades like many of my closest neighbors. I simply returned to my home city and chose this neighborhood because against all odds it had the enlivening feel of community I’ve found in very few places. How could that be? Regardless of daily gunfire, drug sales, arson, and all manner of recklessness, death, and crime, there was something going on here with which I had to engage.

North St. Louis is regularly used as the poster child for community dissolution. The list of causes and conditions for the present reality is extensive, ongoing, and frankly disheartening to recount. From dispelled industry to extensive white flight throughout The Great Migration to astonishingly failed top-down policy and planning, this is just the dust on the surface. Peel back a couple layers and it gets far more discouraging, as if every element needed for the continuance of human community has been ripped out from underneath and scrapped.

The neighborhood I live in is one of the oldest neighborhoods in north city. It has historically deep and actively growing roots that have allowed it to continue to stand while much of the city around it has fallen. A huge reason for that is the Old North St. Louis Restoration Group founded by neighborhood residents in 1981 as a community revitalization non-profit (ONSLRG). They started out boarding up abandoned buildings, creating gardens on vacant lots, and forming closer bonds among residents. They’ve since gone on to restore entire blocks of historic buildings, build new affordable housing, and incubate neighborhood businesses, among many other successes.

I was humbled as I got to know Old North. Here they were, doing so many things urban permaculturists talk about, totally unaware of the moniker. With many visits to the neighborhood and much research, I realized how much I had to learn despite already being a leader in the permaculture field.

In my first few days living in Old North, I walked to the 13th Street Community Garden (a project of ONSLRG) to see about getting involved. I began by weeding overgrown gardens and helping harvest for the North City Farmers’ Market. After showing up repeatedly and quietly attending garden meetings, my neighbors asked if I would take the lead in the market garden. I did have extensive market farming experience to offer, and definitely saw room for improvement, but I didn’t talk myself up. I simply demonstrated my ability by being helpful. I wasn’t seeking to work in a perfect permaculture paradise either (whatever that would mean), so I had no reason to force my own ideas and potentially repel my neighbors. What I cared about was learning from the efforts here, and contributing to the existing goals.

The aims of the 13th Street Community Garden and North City Farmers’ Market were to increase access to fresh, healthy food in this food desert, to be a source of beauty and ecological health, and to build community in the neighborhood. These are worthy goals for any “permaculture” project, and for this challenging place, without these essentials, and especially each other, there’s no chance of permanence in human culture at all. In a way, the neighborhood felt like the essence of permaculture to me—a community that has strived to last in the face of ruin—a likely distillation of what permaculture will need to mean for many more places over the next one hundred years.

Every Saturday from May to October my gardening neighbors and I get up early to harvest and set up tents for the North City Farmers’ Market. We do a pop-up market in the garden mere steps from where the food is grown. We have a regular crew most Saturdays, as well as a changing cast of characters from week to week.

Sometimes groups from other parts of the city come to help and learn. Oftentimes boys from the neighborhood wake up early to perform quality control sampling of the veggies. And less frequently it’s just two of us, running around with an ever-present feeling of being behind. The hallmark is that we are here, consistently, as a hub in the community.

I’ve observed the garden serve as shelter from gunfire. I’ve facilitated young children having their first experiences devouring fruit off a tree or a carrot from the ground. I’ve had neighborhood boys pick flowers, take them home, and come back the next week with a notebook full of drawn zinnias and roses to show me. And I’ve felt the corners of my mouth lift higher in this space than any other.

What allows this garden to exist is effort. We’re all volunteering our Saturday mornings for over half the year to make the garden possible. Nobody gets paid to be here. Instead, we find great value being in community as we work for community.

We’re growing on top of a collapsed cooperage, a former barrel-making factory. There is very little soil before ruins. I can barely get a garden fork ten inches deep before clanging against rubble. There’s one spot of compacted wreckage at the surface that stays bare and grey, with green growth all around. I call it the garden truth window, showing we don’t need much to build something of value.

We’ve been composting, sheet mulching, and cover cropping for years, and that accounts for our production—the ecological processes that allow the former factory site to be human habitat at all. Without the people though, there would be nothing. The persistent bermuda grass would do about as good of a job at greening this urban desert as our preferred crimson clover, and the neighborhood has plenty of green-grassed lots to go around, with nobody using them.

But when the blue tops of the tents unfurl and the street signs for the farmers’ market go up, the 13th St. Community Garden is like a beacon. Suddenly there are kids running around, customers asking if they can walk through the rows, neighbors looking to help out and converse. Life shows up at the presence of other life. At that moment, this is the most important thing going on in the neighborhood, built from the rubble up by human will.

I’ve taken to paying attention to other things that bring people together here too. Anywhere on the northside of St. Louis, a dollar store exists nearby. It’s evident that dollar stores are some of the most important businesses in low-income communities. This is simple observation science, as they are always hopping with life, and for one reason—they meet community needs. In Old North, residents themselves directly advocated for the Family Dollar at the entrance to the neighborhood.

As with any observation made, I make them to inform what I do. A year ago I proposed to the garden group that we nickname our market the “Dollar Store Produce Stand”. “What if we sold everything for a dollar a pound and a dollar a bunch,” I asked? The group has kept such good records, I was able to go back and determine that if most items were sold in one-dollar increments the market would make the same amount of money it has historically, if not more due to increased affordability and pricing consistency. The exceptions being heavy weighted items like fifteen-pound watermelons, which could be sold for a few dollars. We decided to try this pricing pattern out.

It turns out we’ve sold a lot more with this technique. We made the market more approachable by fitting the market pattern to the patterns of the people. And what we are gardening for, is people.

Every single cent we earn from produce sales gets reinvested back into materials for improving the garden. It ends up being a little more than enough. As we improve the garden habitat, the more capacity for life it has. With increased capacity we have more food to distribute, more beauty and ecosystem health, and most importantly, more people coming together in a place with a long history of strife. From passersby turned customers to neighborhood youth turned garden artists to garden enthusiasts turned community builders, we’re bringing people together and finding we all have softer edges than it may otherwise seem.

Over the last three years the garden hasn’t done huge fundraisers, and we haven’t sought big grants. We’ve received basically no press. We’re certainly not a social enterprise. We’re just neighbors, choosing to care for each other because we understand the well-being of ourselves is only as good as the well-being of the community.

Coming back to life

Not everywhere shares the struggles of North St. Louis, and that’s a good thing. With every new climate change report and tale of social conflict, however, my certainty grows that community-based efforts in places like this have a lot to share about permanence in human culture.

In a world that wants to pull apart more than come together, it makes me think those who are ripping apart never understood somewhere that has already been ripped apart, and more importantly, somewhere that has started the difficult mend of sewing the pieces back together. In an effort to advance that understanding, allow me to share this—we’re going to need each other more than anything if we want any chance of a bountiful future. My time here has made this abundantly clear.

For those of us trying to represent the mending, I think the realest version of permaculture needs to be called forth. In the words of Arundhati Roy, “it lives low down on the ground, with its arm around the people who go to battle everyday.”

Jason Gerhardt is director of the 20+ year-old Permaculture Institute Inc. He is the founder of Real Earth Design, where he strives to make permaculture as accessible and authentic to real life as possible. He can be contacted at jason@permaculture.org.

Jason GerhardtCommunity in the Hardest Place I Know05.28.2019
READ MORE